So Feynman called himself, who was certainly one of the greatest innovators of the short century. And it has been in many fields of science and technology.

Born in 1918 to a modest Jewish family in Queens, he studies Physics at MIT in Boston and Princeton; of Physics will be brilliant and beloved professor first at Cornell and then at Caltech.

During the war he collaborated with Manhattan project, together with the best minds of the time, for the construction of the atomic bomb. In 1965 he was awarded the Nobel Prize in Physics for the development of QED (quantum electrodynamics).

In 1986, albeit reluctantly, he joined the Rogers commission commissioned by Reagan to clarify the disaster of the Shuttle Challenger, where, moreover, it was he who understood the causes of the tragedy, despite the resistance of NASA and the bureaucracy (a bureaucracy that Feynman also detests with everything himself).

His lessons (some of which are available on the web, we recommend watching them) have also been transformed into books (Six Easy Pieces, Six Less Easy Pieces) and I'm an example of perhaps unapproachable scientific dissemination, thanks to the overflowing personality and communication skills by Feynman.

In his spare time he finds a way to start fundamental studies in the fields of Nanotechnology, quantum computers and computability theory, without neglecting his non-working passions: playing the bongo, hacking safes and padlocks, and drawing female nudes - live, preferably - in dodgy Los Angeles striptease clubs.

Quantum electrodynamics solves the problem of the behavior and interactions between electrons and photons in the electromagnetic field with a high degree of accuracy, and reconciles the quantum approach with the postulates of Einstein's special theory of relativity, a topic already discussed. busy without understanding the best minds of quantum mechanics: Shroedinger, Dirac and Heisenberg.

In developing the QED Feynman literally invents the diagrams that take his name and which graphically and intuitively describe the possible interactions between particles.

Nothing like this had ever been seen in physics before Feynman: it will be worth the Nobel Prize in Physics.

At the end of the 70s, Feynman on the one hand realized that traditional computers based on silicon transistors were insufficient to simulate a quantum system, while on the other he became more and more passionate about nanotechnologies. In a 1982 paper, Simulating Physics with Computers, theorizes the need to develop quantum computers based on the quantum property of some particles to be simultaneously in two states (up and down). According to quantum physics, in fact, a particle, an electron for example, is in a superposition of two states (spin up and down), just like Shroedinger's cats that are simultaneously alive e dead.

It follows that a quantum computer with x particles (qubits) can have at the same time 2 states at x, while a traditional one can only have one state at a time. 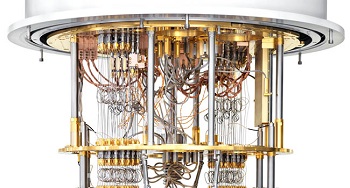 In this way computing power increases exponentially, and makes quantum computers particularly suitable for solving problems that require a high number of mathematical computations such as cryptography or, precisely, the quantum simulation.

Quantum computers, while not contravening the laws of physics, were largely unattainable from a technological point of view in the 80s and still present enormous technical problems today.

Feynman's great vision is that he thought about the possibility of their creation more than 35 years ahead of the times of technology.

Feynman liked to think of extreme objects from a technological point of view, but according to him achievable as they do not violate the laws of physics. Quantum computers and nanotechnologies are two brilliant examples of (moreover connected) innovations think well before the technological possibility of practically realizing them, which then became - after him - real innovations.

We thank for the contribution